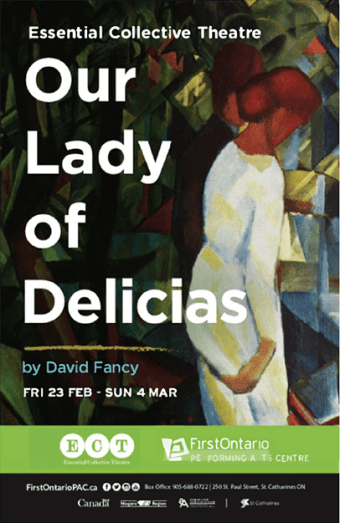 Ediciones SinParedes (Mexico City) is publishing a translation of Our Lady of Delicias in Spanish, done by Maria Constanza Guzman (York U). Here's a draft I've written the introduction to the volume that I'm co-editing.

As Georges Monbiot affirms with provocative simplicity in Out of the Wreckage: A New Politics for an Age of Crisis: ‘those who tell the stories run the world.’ Important questions follow from his statement: Who gets to tell these stories? Are the stories accurate depictions of what is happening or are they delusions (or a mix of both)? Can we tell stories that allow us to imagine how to live differently together moving forward? This volume of North American plays provides a range of potential responses to these kinds of questions. Together the plays exemplify the kinds of stories we need to be telling ourselves: stories about the truth of power, stories about the curative powers of truth, stories about the power of imagination, of collective enterprise, and of love. Each playwright brings to bear their own particular aesthetic and political insight, their lived experience, and their theatrical culture to the manifold stories here.

What is the context in which these authors, organized by their complex and diverse relationships with a continent, undertake their work? It is clear that authors, readers, and audiences alike face the mutually reinforcing planetary crises of democratic deficits; of climate change; of capitalism integrating itself at the most capillary levels of existence; of the traumas and stains of colonial and genocidal imperial actions; of the too-slow withering of millennia of patriarchy and of a loathsome anthropocentrism; and of increasingly radical disparities between global oligarchs and the global poor. As authors based in North America—or Turtle Island as the continent is known by many indigenous activists and artists—the playwrights in this volume also share a relationship with the specificities of a diversity of singularites landscapes, of the particularities of recent European-led genocide, slavery, and colonial land theft, and of having to negotiate the epicentre of the global military hegemon of the United States and its ally, Canada.

The wider question of what constitutes the relation between the political and the theatrical is especially significant for the ways in which we negotiate the realities of narrative, of theatrical representation, of performed language, and the political landscapes with which the stories in this volume are related. A difficult question lingers at the top of a volume such as this: in this era of the postdramatic, in this era where the written dramatic text as template for performance has continued its multi-decade decentralization, in this era where the traditional play is increasingly peripheral in some theatre cultures, and in the era of so many other accessible forms of media and storytelling: why a book of plays?

First of all, as editors we continue to value and celebrate the complexity of language and thought for their capacity to generate insight, foreground paradox and contradiction, and to lead us into affective and political realms with which we might not already be familiar. As practitioners we also recognize the many forms of studio and creation work that foreground the contributions of actors, dramaturgs, scenographers, technicians, and many others, to the unfolding of the eventual production of a written text. In other words, we reject the notion of a dramatic text as a one-way prescription of a template, one that would dominate a ‘secondary’ group of artists and expressions. We understand there to be a rich set of horizontal relations between a text, a process of discovery in the studio involving many artists and media.

Similarly, we understand there to be a complex set relationship between the eventual production of these plays and the worlds around them. What is political about these plays is not necessarily a ‘message,’ although all of the texts engage political themes with a view to foregrounding and unpacking dynamics of supremacy in the worlds they create and describe. These assemblages of affect—these engines of potentiality between theme, character, language, and context within the plays—generate equally potent connections with the world beyond the dramatic fiction. Manuelita, the character in Carmen Aguirre’s Refugee Hotel says of her father who lived through the torture and excesses of Pinochet’s Chile suggests, ‘He lived in the open wound and he died in the open wound.’ The text, like all the others in the volume, lead us into the wound of colonialism and sexism, but not simply to injure us again. Instead, we resonate with the wound, are invited into is configurations, and any number of curative expressions might surface in us, and in the body politic, as a response. Gone are the times when we can reasonably expect, as one might with an early Brechtian Lerhstuck or learning play, to educate an audience in direct terms with a message emergent from exposure to a contradiction or dialectic. The wound of the world has gone too deep, there is no outside, we are necessarily complicit. And yet this does not mean beyond all hope. While suicide may be a viable option for some, it does not have to be so for all. After years of survival, the grandmother in Refugee Hotel attempts to take her own life by putting her head in the oven. Except it is electrical, not gas, and so the poignancy of her attempt results in an invitation to enjoy the reality of her misunderstanding, her incompetence in the face of even self-immolation, and the uncomfortable comedy of her hair burnt by the electrical element in the stove. The compassion with which we narrate our attempts to live in alignment with a greater and more ethical mutuality than what global corporate capitalism and its endless wars gives us can be an important salve to our alienation.

Other affirmations continue to present themselves in the face of the wound: the cosmic, poetic and shamanic perspectives offered in David Fancy’s Our Lady of Delicias, as the Aztec Goddess of Drought stages her return after 500 years disguised as a Christian saint, or the character of Rooster the bird dog, a canine in a state of becoming-avian in Caridad Scich’s Agua de Luna, who offers lines of poetic flight through and beyond the towns and rivers in a mythical Detroit, ravaged by the real and metaphorical fires of the flight of capital to other parts of the globe. The theatricality reminiscent of Genet in Catherine Léger’s Baby-Sitter gives us, in the parasitical character of the child-minder, a reflection of the lives of the family of the child in her care with increasingly surreal and operatic reflections of their own sexist and sexualized realities. Or the realities of the couples featured in Drew Hayden Taylor’s Crees in the Carribean and Augusto Amador’s Atacama, each of whose different and evolving forms of connection with and love for the other exposes deeper fractures and tectonic fault-lines needing near geological levels of movement, digging, and volcanic activity to shift and displace. And then of course the complex transposition of the familial dynamics in Eddy Díaz Souza’s Qué te importa que te ame (Ifigenia Inmóvil), reminding us with its Attic resonances of the primordial nature of our need for connection beyond enforced diasporas (diasporas of the heart across faux borders of gender, beyond the tenacious ‘fake news’ of racial minoritization) that repeat over millennia.

The intensities and capacity to affect and be affected in the plays are profoundly political in that they open up pathways of critique, and desires for increased freedom and intensity in turn in the reader and audience. These affects exceed traditional understandings of representation as the communication in discrete terms of ‘objects of knowledge’, but instead promotes the realities of process, of multi-level forms of intervention (somatic, critical, affective, corporeal, spiritual, emotional, cognitive, etc.) in and beyond the communities in which they are shown. The return to a less mediated present— one of bodies with bodies working in a studio, followed by bodies with bodies in a performance space — can potentially bring spectators back from vacuous capitalized digital wastelands. And not returning them to a mythologized ‘time before’ the digital, but rather the more important ‘time within’ the digital. This temporality of revolt can offer a bulwark of impactful experiences that may generate a spectator as resistant to the inevitabilities of the now, resistant to the erosion of memory, resistant to the homogenization inflicted by an emergent global petit-bourgeois culture supported and sustained by extractive social media capitalism. And the fact that these spectators, gathered as they might be together in the collaborative process of meaning-making which is the audience, are fundamentally together (even if in some superficial fashion), can provide the model for a collectively resistant body politic.

Such a social soma is one not necessarily qualified by its shared homogeneous political perspective. Instead, it is a body politic constituted by its resistance to the simplification and idiocy demanded of it by the re-emergent populisms and fascisms that mark our shared political moments. What we seek to help initiate with this volume is an audience in a complex relationship of process with a production, which is in turn a complex processual relationship between a group of artists and producers (including the writer). We hope this volume serve as an open-ended call for more engagement, more feeling, more memory, more unorthodoxy, more resistance to an oppressively soporific and terrifying now. May these processes continue unfolding and contribute to unexpected connections, solidarities, revelations, and revolt.