alt.theatre review of Our Lady of Delicias 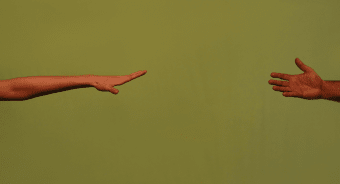 Check out the alt.theatre review of Our Lady of Delicias here: https://alttheatre.ca/2018/06/09/review-patron-saints-and-picking-grapes-in-our-lady-of-delicias/

“Emigration Equals Migration Confusion Squared.” So says Rangel, a migrant worker on a farm in the Niagara Region of Southern Ontario, over the phone to his wife Delores back home in Mexico. Delores is pregnant, Rangel is clinically dehydrated (and depressed), and their family dynamic – all too common for the thousands of migrant labourers who travel from Central and South America to work on Canadian farms – is the premise of Essential Collective Theatre’s new play Our Lady of Delicias. This family dynamic is about to be radically shaken up, however; not only is Rangel’s increasing frustration with his inhumane working conditions getting him in hot water with his employers, but the saintly Lady of Delicias is making her way north to seek out his help as one of her last worshippers. And, like so much in playwright David Fancy’s magical realist text, Our Lady is not quite what she seems (or, rather, she is what she seems, and so much more).

On one hand, Our Lady of Delicias is the story of migrant labour in Canada. While the exploitation of and systemic violence waged against Latinx and migrant populations is often (justifiably) associated with our neighbours directly south, Our Lady of Deliciasis an urgent, and urgently contemporary, reminder of Canada’s own mistreatment of these communities. On the other hand, it rehashes and remixes the same old story of European settler colonialism (economic, societal, and ideological) that has plagued the Americas for centuries, from conquistadors to foreign worker recruiters, offering a fresh but recognizable picture of the impact of colonialism on labour and power dynamics.

A third phantom hand tells a story of vengeance – ecological, chicana revenge against a colonial misogyny. But I’ll get to that in a minute.

In Our Lady of Delicias, Essential Collective Theatre (ECT) presents a compellingly complex narrative in a disarmingly frank fashion, directed by exiting artistic director Monica Dufault. It’s a welcome addition to the company’s body of work, which has been largely invested in documenting local stories in the Niagara Region. As one of few professional theatre companies on the always-revitalizing St. Catharines arts scene, ECT has carved out a distinct niche for itself as point of convergence between emerging artists, Equity actors in the off-season of nearby Shaw Festival, and visiting creators. While the void-like expanse of the FirstOntario Performing Arts Centre’s Robertson Theatre (a high-tech and rather depressing establishment much like any number of sterile government-run black boxes that sprout up to produce and police regional work) runs the risk of swallowing up the show’s haphazard but enticing surrealism, and diluting its deceptively radical content, Our Lady of Delicias succeeds in being profoundly tricky to pin down – narratively, aesthetically, and ideologically. Its coy evasion of simple dramatic dichotomies (good/bad, past/present, real/surreal, etc.) may indeed be the whole point.

The story unfolds like this: Rangel (Juan Carlos Velis) is a former carpenter and current labourer on a farm in rural Southern Ontario. Thousands of miles away in Mexico are his pregnant wife Delores (Camila Diaz-Varela) and daughter. Every year, Rangel makes the trek up to Canada for the agricultural season as part of a foreign workers program, a journey he is finding increasingly insurmountable – not least of all because the constant exposure to pesticides is slowly killing him. He is dehydrated to the point of distraction, and, as he tells a doctor at a migrant worker clinic (Josée Young), dreaming fitfully of swallowing whole rivers.

You might say Rangel is experiencing his own personal drought, which is fitting since his patron saint – Our Lady of Delicias, the patron saint of migrants – is actually the Aztec goddess of drought Atlacoya in disguise (the dazzling Carla Melo). A parallel story finds her making her way slowly north, to seek out the help of Rangel and exact a sinister revenge on humanity by destroying the Niagara Falls (“Shit on nature and nature’s going to shit on you”). Forced to disguise herself as any number of Christian figures, Atlacoya is fed up with wearing masks and is ready to demand she be worshipped for who she really is.

The mask-wearing, identity-questioning multiplicity of Atlacoya is the thematic crucible of Our Lady of Delicias, which cleverly – if sometimes chaotically – weaves its seemingly disparate narratives into a gripping story, and which moves ultimately to a concluding ambiguity that is equal parts satisfying and dissonant.

Temporality, location, and characterization are pleasantly and evocatively hazy, and designer James McCoy’s projections, which serve as chief indicators of location, are reminiscent both of Mexican Surrealism and Impressionism. The show program cites Spanish/Mexican feminist painter Remedios Varo as inspiration, but traces of Impressionist Edgar Degas, Expressionist Edvard Munch, and even Dutch Golden Age painter Johannes Vermeer can also be found in McCoy’s fiery and flowery work. Costume pieces designed by Jo Pacinda are put to clever use – such as an azure blue scarf worn by Melo, casually wrapped around her waist as Atlacoya or piously draped across her head as Lady, or a spectacular strawberry-red dress that looks like it burst out of a Diego Rivera still life – and they do much to lead the audience between the production’s dizzying surrealities.

These painterly connections are not superfluously made; indeed, the production very much feels like a painting, both in its striking visual qualities and its quasi-episodic nature. As we move between scenes, I experience the feeling of moving between canvases: a portrait of life for a soon-to-be mother; a religious etching of female sainthood; a Social Realism portrait of migrant workers; a Surrealist landscape; a still life. This sense is augmented by the fact that we rarely see characters move between locations, despite the play’s theme of mobility; instead, we are set down in the middle of their conversations, their activities, their lives, by the use of frequent blackouts. The juxtaposition between these still life scenes and the play’s preoccupation with movement and migration has the potential to evoke an enticing quality of dissonance that is never quite fully realized. It’s a compelling choice, but is rendered rather stilted at times by too-long blackouts and a too-vast playing space.

Cutting across these moments of stillness is Our Lady herself. As the intertwining double helix of Atlacoya and the Señora de Guadalupe-inspired Lady of Delicias, Melo’s actor body is the primary site of the play’s anti-realism. It’s a monumental task, but one Melo is more than equipped to take on: her dance and physical theatre background is put to enthralling use, with abstracted gestures reminiscent of both Butoh dance and Brechtian gestus.

Playwright David Fancy aptly weaves together these religious female figureheads, and the resulting confusion of identity is a key element of the play’s de- and re-forming narrative structure, which Melo plays exquisitely. Rather than simply recount or perform a transition from one (Aztec) goddess to another (Christian), Melo is in a continual state of becoming and unbecoming both simultaneously, like two sides of a spinning coin, speaking to a history of religiously manifested colonialism as well as to larger themes of concealment and movement.

Apt, also, is the environmental qualities evoked by Melo’s combination of fluidic movement and sharp gesture. As Altacoya, she is both an ambassador of the land and the land itself; it’s impossible, for me, to remove this manifestation of Atlacoya from larger contexts of Indigeneity, colonialism, and environmental disaster. This isn’t to say that she embodies a simplistic Mother Earth figure or, worse still, a kind of Latinx-Lorax (she’s not so much the voice of the trees as she is their fist). Here, in Melo’s increasingly hostile-seeming (but oh so charming) Atlacoya, the fire in the belly of Our Lady of Delicias can be glimpsed. Because as much as it is a story about migrant worker rights (and, given that ECT provided free transportation and entry to migrant labourers throughout the run, a production very much committed to labour rights), it is also a story of revenge.

And this is the note we are left on. As we chug along towards the final scene the various story threads are not so much woven together as thrust into one another. Atlacoya succeeds in insinuating herself into Rangel and Delores’ family (as midwife, grandmother, child, surrogate mother, you name it), accompanied by fiery explosions blossoming from overhead projectors and speakers emitting a shrill, orchestral descant. In this sonorous mess, the message of Atlacoya, Goddess of Drought, rings out loud and clear: You colonize our country, you ravage our land, you steal our people. Fine. Watch everything you own dry up and die. Who’ll pick your fucking grapes now?

Hayley Malouin is a theatre critic and artist from Toronto. She holds an MA in Studies in Comparative Literature and Arts and a BA in Dramatic Arts Performance, both from Brock University, where she is also a teaching assistant in courses on theatre criticism. Her research is focused on public performance, political protest, and circus.