David Fancy’s hack of the Shaw play is set in the world of video gaming: Cusins is a computer programmer who is pursuing a government contract for his software — a strategy calculator that can predict an enemy’s next move. Barbara is a surveillance genius and government-sanctioned hacker who wants to make sure that everything that Cusins does is morally right (as she sees it) for the gaming world. The play moves between virtual and real worlds, and it is Cusins who controls these moves, although it isn't long before Barbara catches up...

Major Predictions, Barbara and the world of video games.

While an in-depth knowledge of video gaming is not necessary to understand the play, some background may enhance the viewer’s enjoyment. The play evokes a number of categories of video games, including simulation games, role-playing games (RPG), first-person shooters (FPS), and massively multiplayer online role-playing games (MMORPG). In his lab Cusins is developing a number of avatars; his relationship with them in some ways echoes The Sims – an open-world or sandbox simulation game in which the player creates avatars and controls them as they go about their daily lives, with few limits or rules around the gameplay. In role-playing games (RPG) the player is usually the central character and completes the game by interacting with other characters and working their way through difficult situations. In some ways Cusins’ relationship to the play overall is like an RPG that he is navigating, working through, and trying to keep control of. The point of a FPS game is to beat your opponents; it takes a great deal of strategy, deception, and planning. We can also therefore consider that Cusins “plays” the plot as if it were an FPS, with Barbara in turn using different strategies to try to stop him.

Video games enter the play most literally in the long second-act scene in which Barbara experiences Cusins’ simulations firsthand. This is where MMORPGs come in. The worlds of these games are vast and expansive places to explore, full of challenges -- and you never know what's quite to come next. The first of Cusins’ simulations seems like an MMORPG in that it could be played by multiple people around the world in different locations, though we only see it being played by Barbara. The next simulation is an FPS game in an urban setting, and the final one is an RPG that Cusins builds specifically for Barbara and which brings the world of Shaw’s original play into this one.

The first reading was the result of a week of workshops directed by Leslie Wade and featured Dramatic Arts students and current and past members of the Shaw Festival ensemble, including Colin Anthes, Martin Happer, Adrian Marchesano, Sean McClelland, Nora McLellan, Michelle Mohammed, and Ric Reid.

This text provides a rich opportunity for the intersection between virtual and theatrical worlds, and the exploration of the collision of established and new stories & forms of storytelling. 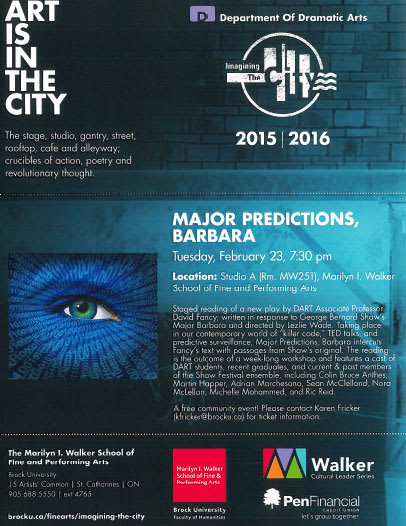 CUSINS
Say you’re wanting
to anticipate
when the hobgoblin is going to come over the castle wall,
or when the shuttle will meet
a destructive fireball
or alien craft,
the astute gamer will have an
intuitive
sense of possibilities
based on her experience of the game parameters

CUSINS
With practice
the gamer becomes
an intuitive site of:
predictive analytics

Anticipation of what terrors / can come